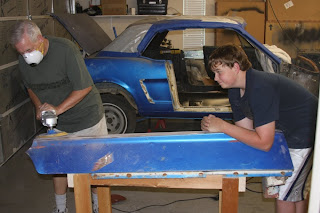 (Matt is like: "Grandaddy, you sure you know what you are doing? !" )
This is an interesting blog entry. This project began in June, 2009 and was finished up today! We are calling this the "3G Fender Restoration" Three Generations of Ramsey's worked on it. In June 2009 my dad (Dan, aka Grandaddy Williams!) came out for a visit. While he was here we put him to work. He didn't seem to interested in spending alot of time working on the car, so we just removed the old paint from the fender, and hammered out some of the dents. After he left and headed back to Tennessee, we put the fenders to the side and worked on the rear section of the car, as documented in previous entries.
This weekened, we finished off the passenger side fender that we started almost one year ago!
Click Images to Enlarge
In June 2009, we had started with some aircraft stripper to loosen the old paint. It has multiple layers of paint, primer, and body filler. 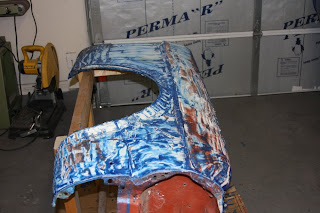 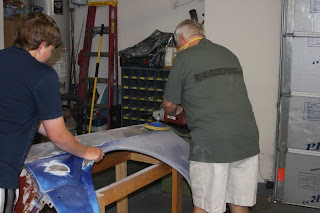 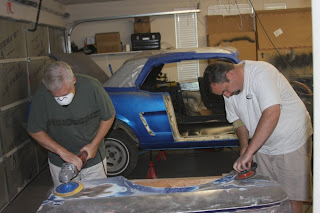 So fast forward to today... we started the rust repairs. A few small areas were cut out and patches made, but the area right behind the front tire was in bad shape. Very thin, pitted, rust holes. We used an aftermarket patch from American Designer. The fit was decent, and we were able to cut below the factory body line to preserve it's shape. Matt holding the patch panel, with the tape showing our cut line. 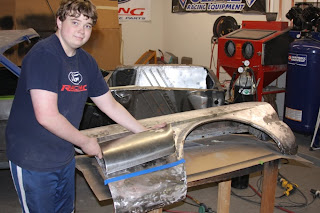 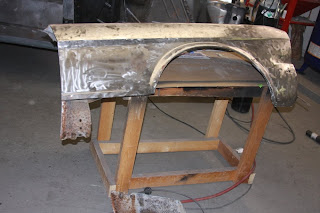 You can see the rust in the old section that we cutout compared to the new patch. 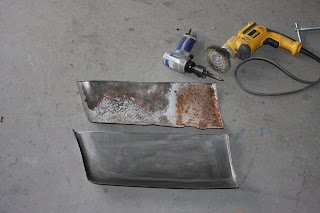 The support behind the fender had some surface rust on it, so matt masked off the area so we could blast it and treat it with a rust converter and a coat of rust inhibiting paint (Zero Rust) 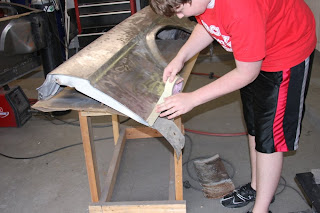 Here is the new patch welded in 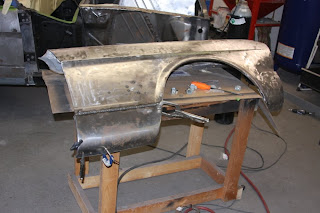 Close up of the seem butt welded. Also, we are shaving the factory logos and trim, so a few small mounting holes were also welded up. 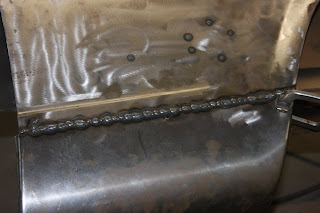 Welds grounded down and cleaned up. It's ready for a skim coat of filler to finish it off. 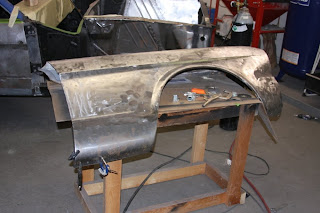